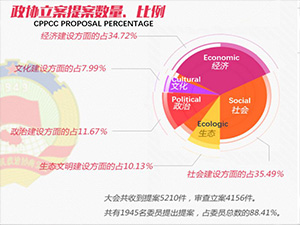 Since last year, I have argued that economic growth in China would take a less and less important role in China’s political agenda. My view is that Chinese policymakers are well aware that growth cannot be sustained for the foreseeable future and are therefore looking for new objectives and for a new narrative that can maintain social stability. It is a bit like an ex-post rationalisation of a problem: “Given that GDP growth cannot be sustained, let’s play down the importance of the economy and focus on other goals so that we can continue to meet those – new – objective“. The output from the Two Session seems to go in this direction.

Policymakers in CPPCC made 5,210 proposals, with the topics covering economy, politics, cultural, social development, ecological and environmental protection. However, this year, the percentage of economic issues has declined from 43% in 2016 to 34.7% in 2017. This indicates, as I argue, that the focus of Chinese policymakers is shifting away from pure economic issues. The percentage of proposals in other areas has, consequentially, increased slightly.  The nature of proposals is also different from before and are more diversified this year, compared to last year. Proposals are focused on issues like energy consumption, poverty reduction and the production of safe, quality goods.

The State Council has published a comprehensive Work Report that summarises the results reached in 2016 and highlights the targets for 2017. A Must Read document for anyone who wished to understand where China is heading in the current year.  For full text of the government report (in English), please click here.